This is the Aunt Grace's Garden Party Block of the Month quilt I did a while back as a shop sample and class. I'm giving it to mom as a Christmas present. She saw it when I was just about done with the top and loved the colors. 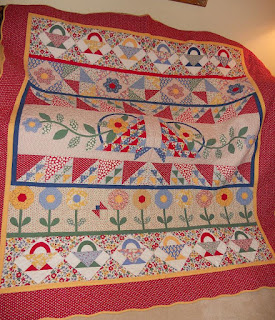 Lately I've been neglecting this blog but mom has been pretty sick and I'm staying downstate with dad so that I can be with mom at the hospital. She was just moved to a rehab nursing home. Now it's time to head home for a few days to celebrate Christmas with Al and our girls (and my new son-in-law). Mom is stable now after a very scary week. She's a super strong lady... been through so much and just keeps going and fighting. I have complete confidence that she will get past this set back. My brothers from CA are in to stay and visit for a bit... that's cheering up both mom and dad.

Hope all of you out there have a wonderful Christmas and Happy New Year!
at December 21, 2012 2 comments:

This is a Christmas quilt that I just started working on... it's been in my TO DO box for quite a while. 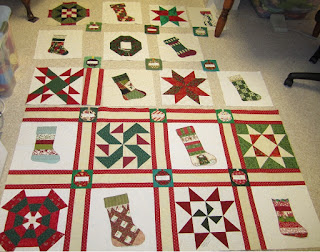 In 2008 I did a swap with some online friends and received the cornerstones which are foundation pieced ornaments. The in 2009 I participated in a stocking swap and finally in 2010, I won a drawing we did on a forum which gave me the red and green pieced blocks.
This year I decided to put all of them together in one quilt. The greens are different from each other and so are the reds plus there are white backgrounds, cream backgounds and some that are an in-between color. 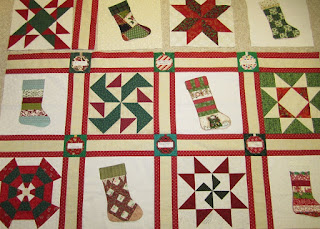 Sashing it with a red dot keeps the blocks separated enough that this color difference doesn't seem to matter, and to incorporate the ornaments, I either had to put a bunch together to make a block or make my sashing wide enough to use the for cornerstones... I decided on the latter or course.
The more I work on this, the more I like it. If it gets done this year or next doesn't matter to me... I just want to get it going. This will be a very special quilt for me... has the dates, signatures and location of many quilters that I've swapped with over the years... lots of memories, you know?
Now this is what I'm MOSTLY working on... the Marmalade Spools quilt... I love playing with this one. The colors are bright and cheerful. 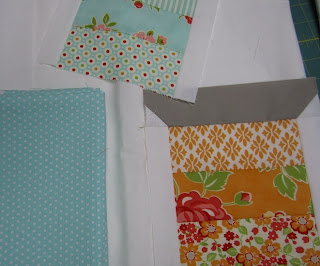 I picked up this aqua polka dot at the quilt shop today. After checking the pattern to see the finished size of this quilt I thought it could use a border going around it to bring it up to a twin size. So that's what the dot is for... I'll probably use the aqua floral for the back...maybe...
And finally, this cute snowman fabric below is for a pillowcase. Instead of the regular size, I'm making it king sized. I just use a full yard for the main part instead of the usual 3/4 of a yard. It's for a twin bed that has a king size pillow on it. Isn't it cute? 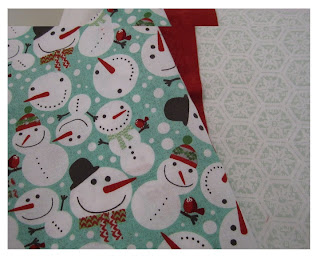 Worth it's weight in GOLD :) 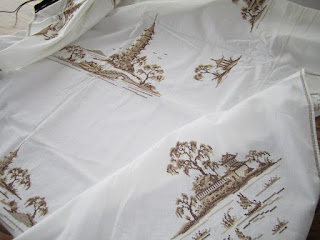 We were chatting this morning on Facebook about the time we put into our quilts and crafts and it brought to mind this tablecloth I bought a while back at a Goodwill. I paid about $4 for it. It's a full sized cloth, fits my table perfectly, but I don't use it ...EVER. There is a TON of work into it and I know I could never replace it if it should get stained. 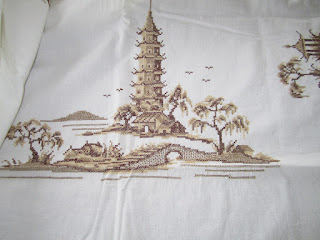 What really gets me is that someone took this treasure and donated it. After all the work that was put into it! I'm not sure if a family member made it or if it was brought back from Japan during the war, or what BUT someone put hours and hours into it.
I took a couple of close-ups so you could see the work. There are designs all ove this cloth, plus there's a matching card table sized cloth with it. 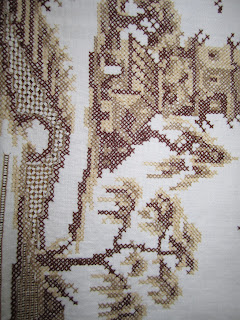 We do a "Block Frenzy" at Hearts to Holly... it's a drawing every month and a half. You make a 12" finished size block using the selected fabric line and for every block you make, your name goes into the pot.. make any block you like. If your name is pulled you win all the blocks. 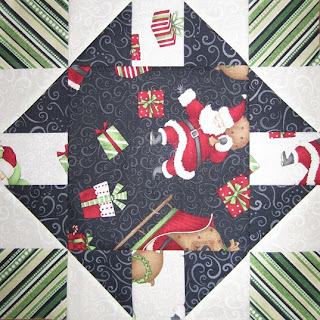 Well, on Saturday Cassidy won the Santa blocks. I made her one extra... I didn't have mine done in time for the draw but finished it today. Congrats, Cassidy! 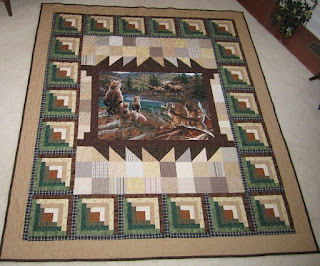 This week saw TWO finishes! The quilt above is for Al's friend that lives in Colorado. Al says he'll go nuts for it. His whole log cabin is decorated with moose, bear and wildlife pictures and statues. This is a large lap or a small twin. 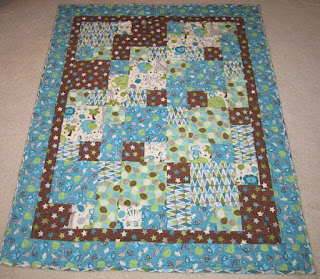 And this is a baby quilt that I made as a sample for Hearts to Holly Quilt shop. They have this cute flannel in Take Five kits.... it's all pre-cut pieces so all you have to do is start stitching. It went together very quickly. I used Fig Tree minky on the back... a very soft and pretty cream. This should be nice for a future grandchild. 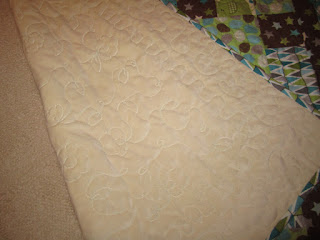 The orange peels blocks are coming along. I made a cardboard template, cut a bunch of ovals and started to applique them onto the white bac... 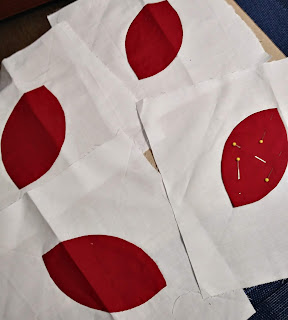 Northern Deb
Quilting and home designing are my favorite pastimes... but the loves of my life are my two wonderful daughters, my hubby of 39 years and my two sweet grandsons!